Donald Trump continues his mastery over the media. Whenever he gets in a bad spot he ‘squirrels’ the media and sends them chasing after a sensationalist but 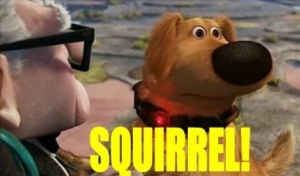 relatively meaningless story to get himself out of trouble.

Obamacare repeal fails (again)? No problem – toss out a tweet on NFL players disrespecting the flag and the military. Oh look, everyone is following that story now.

Federal help to hurricane-ravaged Puerto Rico is late, inept and inadequate? Pick a Twitter fight with a local politician so the press will chase that story instead.

It is simply amazing that almost a year after the election the political media has not figured out how to report on Trump’s tweets without being manipulated by them. Trump brought profound changes American politics – it remains to be seen whether the media will be able to adapt. So far, it does not look good.